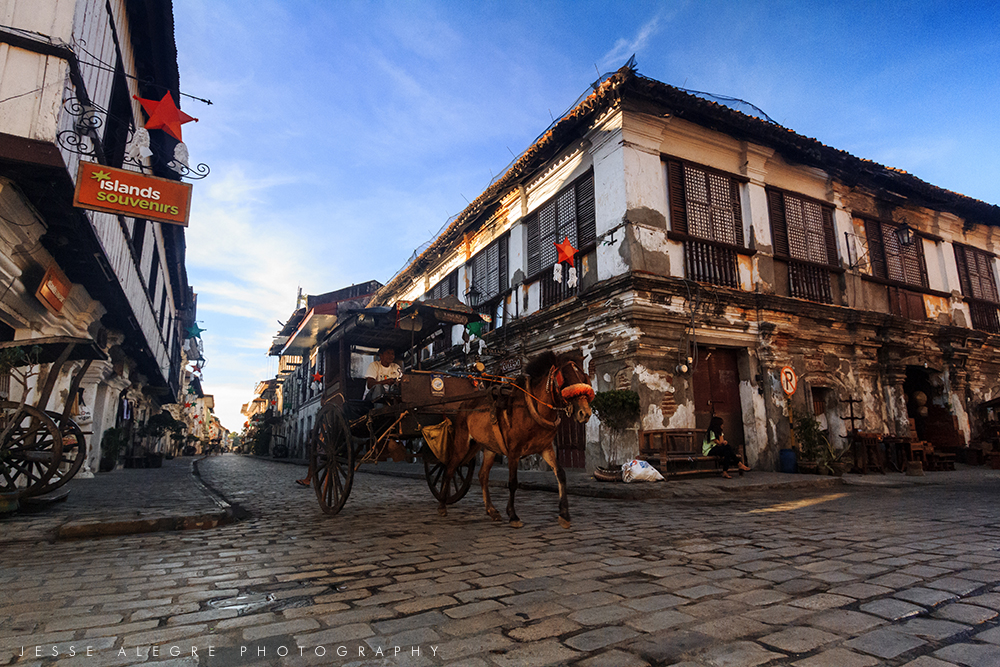 Vigan is an island, which used to be detached from the mainland by three rivers – the great Abra River, the Mestizo River and the Govantes River. It is unique among the Philippine towns because it is the country’s most extensive and only surviving historic city that dates back to the 16th century Spanish colonial period.

Vigan was an important coastal trading post in pre-colonial times. Long before the Spanish galleons, Chinese junks sailing from the South China Sea came to Isla de Bigan through the Mestizo River that surrounded the island. On board were sea-faring merchants that came to barter exotic goods from Asian kingdoms in exchange for gold, beeswax and other mountain products brought down by natives from the Cordilleras. Immigrants, mostly Chinese, settled in Vigan, intermarried with the natives and started the multi-cultural bloodline of the Bigueños.

In the book, The Philippine Island, Vol. III, p. 276, Blair and Robertson, two letters of Governor General Guido de Lavezares to King Philip II of Spain mentions: “It seemed best to send Captain Juan de Salcedo with 70 or 80 soldiers to people the coast of Los Ilocano on the shores of the river called Bigan.” Salcedo then sailed from Manila on May 20, 1572 and arrived in Vigan on June 12, 1572.

Thus, after the successful expedition and exploration of the North, Don Juan de Salcedo founded “Villa Fernandina de Vigan” in honor of King Philip II’s son, Prince Ferdinand who died at the tender age of four. From Vigan, Salcedo rounded the tip of Luzon and proceeded to pacify Camarines, Albay, and Catanduanes.

As a reward for his services to the King, Salcedo was awarded the old province of Ylocos which then composed of the Ilocos Norte, Ilocos Sur, Abra, La Union and some part of Mountain Province as his Encomienda and was accorded the title as Justicia Mayor de esta Provincia de Ylocos.

In January 1574, Salcedo returned to the capital of his Encomienda, Vigan, bringing with him some Augustian Missionaries to pioneer the evangelization of Ylocos and established a Spanish city, for the purpose of controlling the neighboring country.

Governor General Gomez Perez Darmarinas, in his Account of Encomienda dated in Manila on May 31, 1591 states: “The town of Vigan called Villa Fernandina has five or six Spanish citizens with one priest, a Justice, one Alcalde Mayor (Governor) and a Deputy. The King collects 800 tributes (equivalent to 3,200 subjects). During this period, the old Vigan was composed of 19 barrios.

In 1645-1660, Vigan was already divided into 21 Cavezas de Barangay as mentioned in the “Libro de Casamiento”, the oldest records of the parish house of Vigan found in its Archives. Separated from the naturales, the Chinese have their own place of settlement called pariancillo, “Los Sangleyes del parian” and the Spaniards were residents in a villa called “Los Españoles de la Villa”.

How Vigan got its name is told from an anecdote carried by the tongue of generations, which tells of a Spaniard walking along the banks of the Mestizo River. There, he met a native of the place and stopped to inquire: “Como se Ilama usted de esta lugar?”

Not understanding a word of Spanish, the native scratched his head and upon seeing that the Spaniard was pointing to a plant, exclaimed in Ilocano: “Bigaa Apo”. Bigaa being Alcasia Macroniza, a giant Taro plant belonging to the Gabi family which used to thrive at the bank of the Mestizo River. From the name of the plant – Bigaa, whence Vigan derived its name.

LGU-Quezon City Extended their Help to the Affected Bigueños After the Magnitude 7.0 Earthquake

As the City Government of Vigan continuously ...
View All