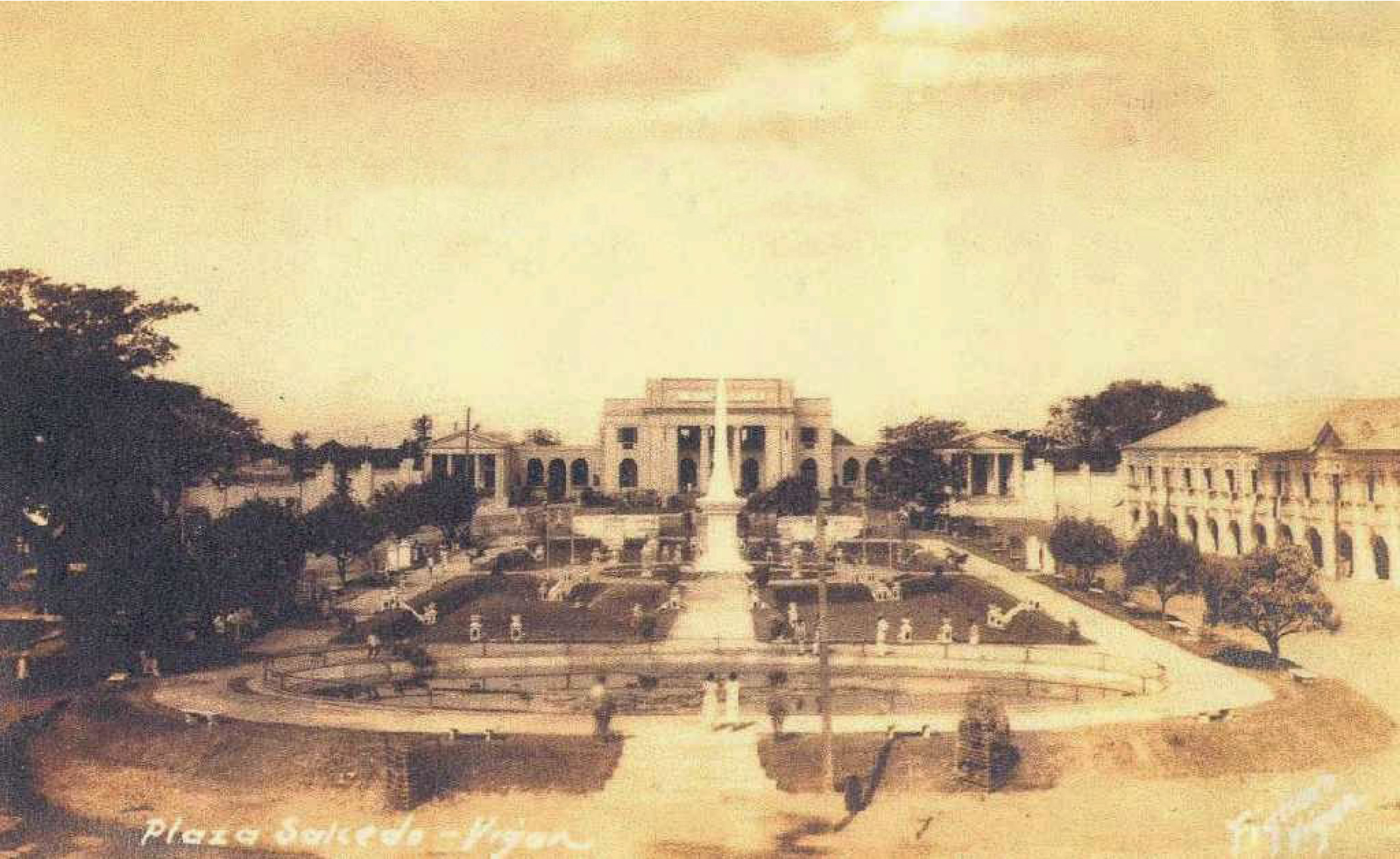 Vigan was an important coastal trading post in pre-colonial times. Long before the Spanish galleons came, Chinese junks sailed from the South China Sea to Isla de Bigan through the Mestizo River. Sea-faring merchants came to barter exotic goods from Asian kingdoms in exchange for gold, beeswax and other mountain products from the Cordilleras. Immigrants, mostly Chinese, settled in Vigan, intermarried with the natives and started the multi-cultural bloodline of the Bigueños.

Thus, after the successful expedition and exploration of the North, Don Juan de Salcedo founded “Villa Fernandina de Vigan” in honor of King Philip II’s son, Prince Ferdinand who died at the tender age of four.

As a reward for his services to the King, Salcedo was awarded the old province of Ylocos which then composed of the Ilocos Norte, Ilocos Sur, Abra, La Union and some parts of the Mountain Province as his Encomienda and was accorded the title as Justicia Mayor de esta Provincia de Ylocos.

In January 1574, Salcedo returned to the capital of his Encomienda, Vigan, bringing with him some Augustinian Missionaries to pioneer the evangelization of Ylocos and established a Spanish city, for the purpose of controlling the neighboring countries.

It was believed that when Juan de Salcedo asked a native what the name of the place is, (as Salcedo spoke in Spanish), the native could not understand a word he was saying. Salcedo however was pointing on the ground and the native thought that he was actually asking for the name of the vegetation planted on the ground. He thereupon said “bigaa apo, bigaa apo”, referring to a tuber plant from the “gabi” or taro family. From then on the Spaniards named the place Bigan.

For 160 years from 1595 to 1758, all the Bishops of the Diocese of Nueva Segovia in Lallo Cagayan, starting with Fray Miguel Benavidez to Fray Diego de Soria preferred to stay in Vigan due to the deteriorating condition of Lallo at that time. Malaria was endemic to the place and was constantly flooded during the rainy season. The Rio Grande de Cagayan was eroding and destroying the site of the Diocese leading to a progressive decay of the town.

In sharp contrast, Vigan, during the same period, was a flourishing Spanish settlement nearer to Manila. It was fast developing into the center of Spanish influence and politico-economic power in the north.

When Don Juan dela Fuente de Yepes became Bishop of Nueva Segovia in 1755, he requested the King of Spain and the Pope for the transfer of the Diocese from Lallo, Cagayan to Vigan, which was at the height of its progress as center of religious, commercial and socio-cultural activities.

He summoned three former Alcalde Mayores: Don Maximino Ballero of Vigan, Don Juan Antonio Panelo of Pangasinan, and Don Francisco Ledem of Cagayan to testify and give their support of the requested transfer of the Diocese. Aside from the former Alcalde Mayores, Bishop dela Fuente also solicited the favorable endorsement of Fray Bernardo Ustaris of the Dominican Order and Fray Manuel Carillo of the Augustinians.

The transfer of the Seat of the Diocese of Nueva Segovia from Lallo, Cagayan to Vigan was formally approved during the Pontificate of Pope Benedict XIV during the reign of Fernando VI, King of Spain by virtue of the Royal Decree of September 7, 1758.

By this Royal Decree, Villa Fernandina de Bigan which became the new seat of the Diocese was automatically elevated to the status of a City known as Ciudad Fernandina de Vigan in honor of the then current King of Spain.

In 1803, the natives were working on agricultural land and the mestizos engaged in business with other provinces including Manila. The mestizos played a very important role in the progress and prosperity of the city of Vigan.

The Chinese in Vigan on the other hand, settled in a place called “Pariancillo” while in Manila they were in “Parian”. With their talent and knowledge in business as well as their skills and mastery of the art of manufacturing, the Chinese became rich and powerful in society. They opened business in the heart of Vigan, employed the naturales, intermarried with the natives and mestizos of Vigan and as time passed by; they rose into the class of the elite. They triggered a business boom in the community and engaged in domestic and foreign trade. They exported indigo, lime, maguey, basi, jars, tobacco, woven cloth called abel, and other local products to Europe, China, Borneo and Malaysia. As a consequence of this business boom, there was a mark change in the lifestyle of the inhabitants.

To justify to the category of Vigan as a city are the documents from “Instituto de Historia Programa de Modernization del Archivo Nacional de Filipinas” that describes that Vigan has its own carcel, casa de gobierno, mercado publico, Provincial High Court and one of the only four (4) Public Works District in the entire Island of Luzon. More importantly, it has an Audencia Territorial, an implicit indication that it was a City.

Today the City Government of Vigan is the repository of a certified true copy of the Royal Decree issued by King Fernando VI. It states among others, that so long as the cathedral stands and the seat of the diocese is in Vigan, it will always remain as a city.

1595   Establishment of the Diocese of Nueva Segovia in Cagayan Valley with Miguel de Benavides, OP, as first Bishop.

1818   Creation of Ilocos Sur and Ilocos Norte as separate provinces.

1852   Organization of the Cementerio de Vigan by Bp. Vicente Barreiro y Perez, OSA, enshrining in the chapel a replica of Apo Lakay in Sinait.  Separation of Lepanto and Tiagan from the
Ilocos.

1897   Artemio “Vibora” Ricarte of Batac in the Tejeros Convention.   Isabelo Artacho of Vigan co-authored the Biak-na-Bato Constitution.  Ventura delos Reyes of Vigan as first Filipino
Diputado to the Spanish Cortes.

1948   Elpidio Quirino from Vigan as Sixth President of the Philippines.

1951   Elevation of Nueva Segovia as an Archdiocese.

1958   Bicentennial of the transfer of Nueva Segovia to Vigan.

1972   Quadricentennial of Christianization of Ilocandia; 150 years of the Vigan Seminary; Centennial of Gomburza.

1995   Quadricentennial of Nueva Segovia as a Diocese.

2000   Jubilee year of the Incarnation of the Lord.

2008 Vigan celebrated the 250th year on the Transfer of the Seat of the Diocese of Nueva Segovia from Lallo, Cagayan to Vigan City

2012 Vigan was awarded as UNESCO’s Best Practice in World Heritage Management on the 40th Anniversary of the World Heritage Convention in Kyoto, Japan

2014 Vigan was named as one of the New Seven Wonders-Cities of the World.

2015 Vigan officially inaugurated (May 7) as a New7Wonders City.

To ease the burden of the families in the loc...

After being confirmed with African Swine Feve...

As the City Government of Vigan envisions her...
View All