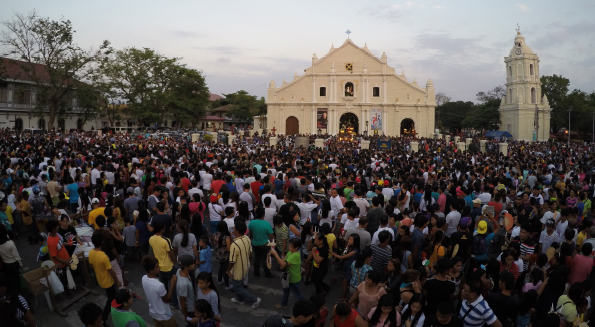 Holy Week  locally known as “Semana Santa” is one of the most attended event of the city. Different religious activities are held all through out the Holy Week. Without a doubt the most attended is the “prosisyon” (procession). The number of  devotees and spectators  joining the procession is countless. Holy Week in Vigan is something different and unique. During Palm Sunday and Good Friday, centuries old, life-size statues mounted in carrozas depicting the LIFE AND PASSSION OF CHRIST can be seen during the procession. From Holy Monday to Easter Sunday, people come to Vigan not only to pray but also to feel and appreciate the charm of the old world.

Vigan has always been a favorite destination during the Holy Week or Semana Santa, but this year more than thousand local and foreign tourists flocked the streets of Vigan City. From the observation of the City Tourism Office , the number of tourists doubles or even triplicates in number. This was first felt last December 2014 after its formal announcement as one of the New 7 Wonders Cities of the World. Empanada vendors are blockbusters after they are being lined up for several hours by customers just to have a taste of the mouth watering Vigan empanada. Stall or souvenir shop owners doesn’t have the pleasure to take a sit because buyers keep coming in. Even kalesa drivers give up and pitied their horses because of non-stop tourists requesting for a ride. All these maybe attributed to the effects of Vigan’s inclusion as one of the New 7 Wonders Cities of the World.

The City Government of Vigan led by Mayor Eva Marie S. Medina expressed her heartfelt gratitude to all who have supported Vigan in its bid to become a wonder city. She added that being in the list of New Seven Wonder, elicit pride in the hearts of every Bigueño She is also overwhelmed with the distinction, “we should intensify our desire to conserve our heritage so we should become more responsible in protecting and preserving it for our younger generation”, she added.

Join the fun, the thrill and the excitement in thi...

Binatbatan Festival of the Arts 2019